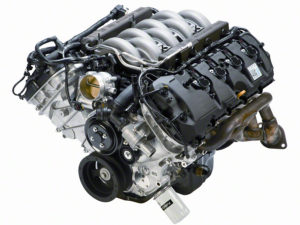 You already know starting a car is as easy as turning a key, but have you ever wondered what really happens under the hood? When your body needs fuel, you feed it food. When your car needs fuel, you “feed" it gasoline. Just like your body converts food into energy, a car engine converts gas into motion. Some newer cars, known as hybrids, also use electricity from batteries to help propel a vehicle. The process of converting gasoline into motion is called "internal combustion." Internal combustion engines use small, controlled explosions to generate the power needed to move your car all the places it needs to go. If you create an explosion in a tiny, enclosed space, such as a piston in an engine, a huge amount of energy is released as expanding gas. A typical car engine creates such explosions hundreds of times per minute. The engine harnesses the energy and uses it to propel your car. The explosions force pistons in the engine to move. When the energy from the first explosion has almost run out, another explosion occurs. This forces the pistons to move again. The cycle continues again and again, giving the car the power needed to run.Car engines use a four-stroke combustion cycle. The four strokes are intake, compression, combustion, and exhaust. The strokes are repeated over and over, generating power. Let's take a closer look at what happens during each phase of the combustion cycle.

Intake: During the intake cycle, the intake valve opens, and the piston moves down. This begins the cycle by bringing air and gas into the engine.

Compression: As the compression cycle begins, the piston moves up and pushes the air and gas into a smaller space. A smaller space means a more powerful explosion.

Combustion: Next, the spark plug creates a spark that ignites and explodes the gas. The power of the explosion forces the piston back down.

Exhaust: During the last part of the cycle, the exhaust valve opens to release waste gas created by the explosion. This gas is moved to the catalytic converter, where it is cleaned, and then through the muffler before it exits the vehicle through the tailpipe.

CarTalk LLC reserves the right to change or discontinue any policy, promotion or service as it sees fit.